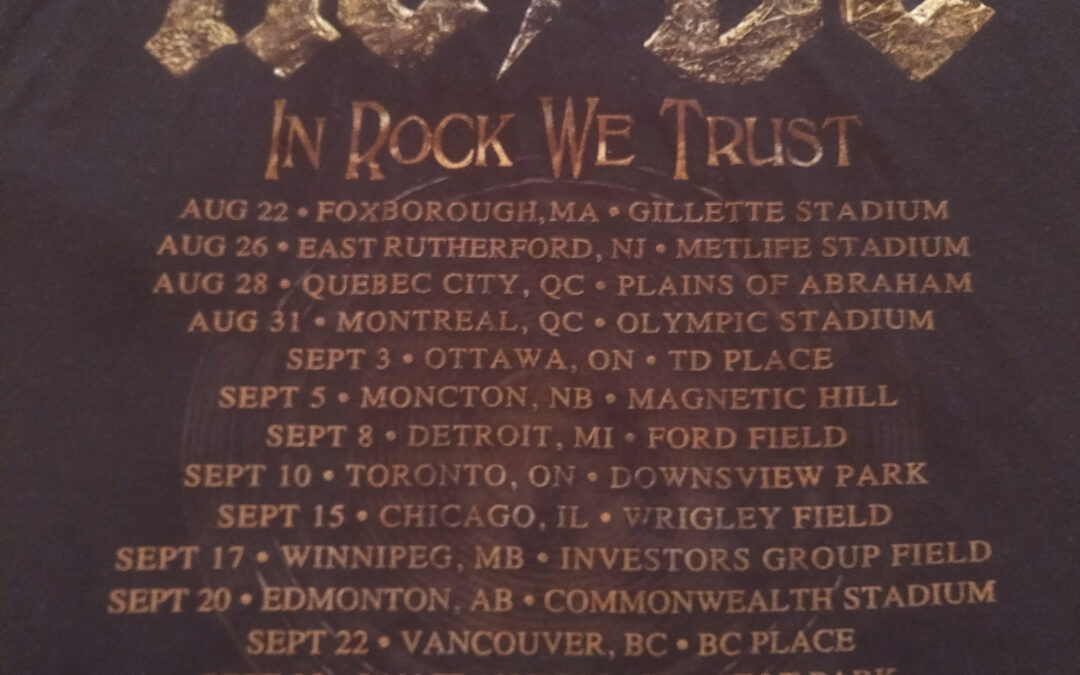 Most music fans have a bucket list of bands and artists they want to see before they die.
I honestly can’t say AC/DC was specifically on that list, but in the spring of 2015, I had convinced myself and my wife, Michaela, that this was an opportunity we couldn’t pass up.

This is somewhat strange because other bands and singers like Fleetwood Mac, Billy Joel, Elton John and Pink Floyd had come to Ottawa and they all fall into rock legend status. So, what was different this time?

I think it was having the money to go and knowing the spectacle it would be, taking place outdoors at TD Place aka Lansdowne Park. The stadium had been newly renovated and was quite a picturesque spot now to watch sports, or in this case, a rock concert. Also, I’m a huge fan of School of Rock. It’s one of my top 5 favourite films, and the band naturally features largely in that one. Jack Black dresses up as Angus Young for the battle of the bands and the last song they play is “It’s a Long Way to the Top (If You Wanna Rock & Roll)”. Man…now I wanna watch it again, haha.

The big rock sound of these Australians was really fun and their setlist was full of greatest hits, along with a couple of new songs, and some pretty cool set elements, including a massive bell for “Hell’s Bells” and cannons that shot confetti for “For Those About To Rock”. At one point, during that song, Angus Young had been elevated on to a platform, high above the football field, wailing on his guitar…just one of many incredible sights that night.

One disappointing anecdote…my wife missed her only favourite AC/DC song, “You Shook Me All Night Long” because she was in the bathroom.

One happy anecdote…the beernuts at TD Place were fantastic. They were made by a local company called “May Contain Nuts”. Don’t think they’re around anymore.

Also, Eleanor attended the concert in utero (Michaela was into her second trimester by then), and maybe it had some influence on her love for rock music today. We’ll never know for sure, but it’s a nice thought. I’m glad we went to the show. It has a unique place in my wife and I’s list of concerts attended.