In the early 2000’s, before blogs, Facebook and Instagram became the most important means of personal online expression, there were free websites that would allow a person to make their own website. As long as you knew some basic html, you could work with the templates provided to create a space on the world wide web that was all your own. A few of my friends and I did just that, creating webpages that reflected our personal interests and updated people on what was going on in our lives. It turns out that both of my webpages, from my highschool and university years, are still online.

“Great, Joe. Your old website is still up. So what? What does this have to do with Sgt. Pepper’s 50th anniversary?” says an anonymous guest’s voice.

Well, I used to write music reviews, something I started when I did my co-op placement, in Grade 12, at The Charlatan, Carleton University’s student newspaper. I liked writing album reviews (still do, though I don’t have time for it anymore), and I’d post them on my website. One of them was for Sgt. Pepper. 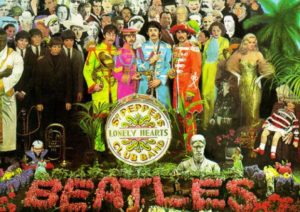 Sgt. Pepper made an impression on me long before I realized it. As a young Joe, I had access to a limited number of tapes, all of which belonged to my parents, until I could start buying my own. The Beatles’ blue album is the first Beatles tape I can remember actively listening to, enjoying songs like Sgt Pepper, With A Little Help From My Friends, and Lucy In The Sky With Diamonds. I did my Grade 8 song project on Penny Lane, a song from the same era which ended up being released before “Pepper”. I would’ve done my band board game project on them, too, but another group picked them first so I had to choose the next best British band: The Rolling Stones. Emily Haines knows the dilemma and so do many, many others. #metric #gimme sympathy

It wasn’t until 2003, which, in retrospect, was an amazing year of musical enlightenment, that I invested my time in listening to each original UK release of the Beatles discography. Borrowing the CDs from my very good pal, Sandy, I would come to know and love everything Beatles, and, for a time, Sgt. Pepper was my favourite Beatles album. No surprise, as I continued to investigate popular rock music, that it also happens to be celebrated as one of the greatest pop albums of the 20th century and beyond. This, amongst other Beatle-related info, would fuel my argument for all modern pop/rock music, after 1964, being influenced in some way by the music of the Beatles. My friend, Chuck and I had a debate that lasted many weeks on that topic. I even taped a piece of paper to my shirt, on which I wrote my Beatles modern music thesis and wore it around school for a day. That’s how ridiculous it got!

I look back on this time fondly. Y’know, it’s pretty amazing that a band of Liverpudlians, once looked at as a flash in the pan pop group, are now considered amongst the greatest musical performers and composers of all time. Their music transcends generations. When I was teaching elementary music, any time I introduced a Beatles song to sing or play or listen to, it was met warmly and happily by the students. They loved seeing my Beatles posters on the wall and the Grade 1’s couldn’t get enough of “Yellow Submarine”. 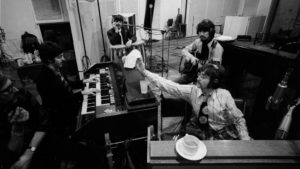 Talk about fly on the wall moments…

This past Thursday marked the 50th anniversary of the UK release of Sgt. Pepper’s Lonely Hearts Club Band.
In another time of my life, this day would have been circled and I would have assuredly celebrated by listening to the album and maybe even playing a few of its songs. These days, life is different and musical anniversaries sometimes get overlooked, but I couldn’t let this one go. Not Sgt. Pepper. It’s too big a deal. It may not be my favourite Beatles album anymore (that distinction goes to Revolver) but it’s still a favourite. It’s a classic. It’s an adventure. It’s special.

Oh yeah, and that album review…I’ve included it below, unedited from the webpage, to get a glimpse into the mind of a kid, just about to graduate highschool, hearing Sgt. Pepper for the first time and the impact of that album on his ears, his heart and his soul. That kid forgot to mention how amazing “A Day In The Life” is and how catchy Good Morning, Good Morning is, but I’ve forgiven him. He was just a kid. #simpleplan #lol

Innovative, enlightening, inventive, groundbreaking and a little weird would all be acceptable ways of describing this album in a few words. Of course, a few words are not enough for Sergeant Pepper and the Lonely Hearts Club Band. Taking on the personas of an imaginary band, the Beatles produced this album with fresh, modern concepts jumbling about in their minds. There are many firsts achieved on ‘Pepper’ as it is known, in short. It is arguably one of the most influential rock albums ever made. But I digress; the music is where the focus shall be.

It is a show, with an audience who is noticeable at different parts on the record. The unique styles of music and recording techniques mark a vivid progression for the Fab Four as musicians. Sgt. Pepper and With A Little Help From My Friends are the closest to simple rock that you’ll hear on the album, two darn catchy tunes which will have your toes tapping for hours at a time. The psychedelic imagery of Lucy in the Sky with Diamonds is the first sign of a band that is willing to stretch the limits of modern music, while transcending the era with their tried and true pop melody for success. Every song, from that point on, adds a new piece to the ‘Pepper’ puzzle. Whether it be the wonderful sitar-based visions of Within You, Without You, the happy, go lucky march When I’m Sixty-Four or the eerie yet beautiful harmonies produced in She’s Leaving Home, the Beatles play each song like it is a fresh canvas waiting to be painted. Each song is like a hundred, different colours splashed about, in special patterns and fashions, sorted in a kind of chaotic order only the Beatles could control.

It seems as though similes and metaphors are the only way I can describe the joys of listening to the album effectively. Pepper is like the Tulip Festival in May, except all the flowers were grown overnight in what appears to be untouched, natural splendor and beauty. Pepper is the inauguration of a new world order inside the music world, an order in which everything following the masterpiece falls in line behind it. There is a wealth of musical talent on this album, a wealth that remains unmatched to this day. Why is there such an aura around these 4 lads from Liverpool? Sgt. Pepper is not gonna lie to you; this is where the music world became more than a day in the life, it became wonderful, golden and brilliant.
-Joe, April 2003