Hi friends. I’ve long had this idea of a recurring blog post topic. In fact, about five years have passed since I took pictures of my old concert ticket stubs and corresponding t-shirts. I did this for two reasons: in case I forget about all of the great concerts I’ve attended and because I liked the visual way it captured the memory. 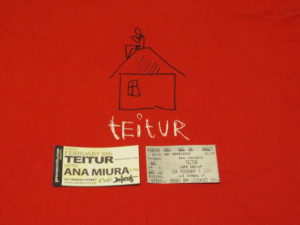 I like the hand-drawn font and logo of this t-shirt. Also the colour.

So here we are in early 2004. I had only recently begun seeing live shows down in the Byward Market, exploring my newfound independence as a 19 year old university student. My pal, Steve had begun performing as a solo artist and it was a real joy to support him at his shows. This one was a big deal because the headliner was an emerging singer-songwriter from the Faroe Islands, Teitur. My buddies and I saw him when he opened for John Mayer, a few months earlier at what turned out to be my first major concert experience at the Corel Centre (now Canadian Tire Centre). To get the opportunity to see him play again was amazing luck. Even better, this was a much more intimate venue, with a high probability of getting to meet him afterwards. It was also special because my pal Steve opened the show.

What I most enjoyed about Teitur’s live performance and his songwriting, in general, was how poetic it all was. The imagery he employed, the metaphor, the honest emotion dripping from every phrase, for a 19 year old guy in the midst of a tumultuous transition between highschool and university, crushing on girls to dating girls, his songs hit the right spot.

His first album, “Poetry & Aeroplanes”, is the one he was touring at this show and it remains my favourite Teitur album. To be honest, though, I haven’t listened to Teitur in years. The songs hit me with so much nostalgia that I can’t listen for long without feeling weighed down by all that was swirling around my mind and heart at that time. For those who have discussed music with me at any length, you’ll know that I sometimes mention “situational like/dislike”. Example: if your Mom played Abba every weekend for years growing up, you may have a situational like for the band because it reminds you of positive memories of family, OR, you may have a situational dislike because you’re just plain sick of the band…or maybe you feel both like and dislike. That gets complicated.

Teitur’s music may be complicated for me, but this concert was not. It was a great time. I did get to meet him. I do have his autograph on my copy of the album and I do recall having had a great time with friends at this show.

Note: Cafe Dekcuf is a cool venue. More on that as we go forward in this series. 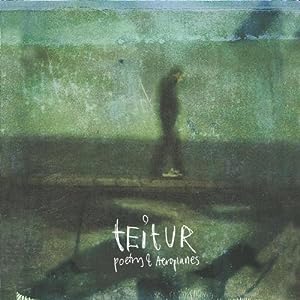 Click the picture to hear my favourite track from the album, the title track.