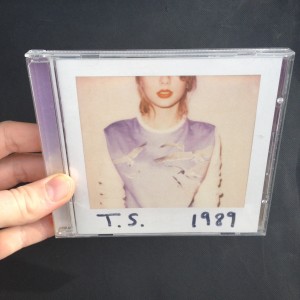 We can’t see her eyes and it’s slightly unsettling. This is an album that knows it’s going to be big. How do I know? She used her initials on the front…no need for full names anymore. The next album may not even have her name on it…just her face. That’s impressive.

J- You may find yourself in one of two camps regarding this selection of ours.

Camp A: Duh! Taylor Swift is one of the biggest names in pop music today and her album has spawned 6 singles. It’s over a year old, debuted at #1 on Billboard, and has sold over 8.6 million copies worldwide. It features 3 #1 singles and has been nominated for Album of the Year and Best Pop Vocal Album for this year’s Grammy awards. She’s kind of a big deal and her music is boss.

Camp B: Um…Joe, are you serious? Since when did you start liking Taylor Swift? Aren’t you, more or less, anti-pop charts and more into classic rock and indie rock? Didn’t you make fun of T-Swizzle the other day? This must be Michaela’s influence! Explain yourself!

To be honest, I’ve always noticed how catchy Taylor Swift’s songs are, but I hadn’t considered myself a fan until this album. Michaela bought this album and hid it from me because she was embarrassed of what I’d say. That was our starting point with 1989. She knew it would be catchy and fun, and I thought it would be over-produced and dumb.

Then, we started listening to it in the car, to and from work, and like the Grinch, in Dr. Seuss’ famous Christmas tale, my heart began to grow in size. There was now room there for a Taylor Swift album, and my wife and I had great fun belting out songs like “Welcome to New York” (our official NYC March Break trip theme song) and “Bad Blood” (HEY!)

Now, I’m not saying every song is a winner, and there are a few songs near the end of the album that I could go without, but, on the whole, it’s a very strong album. I appreciate that Taylor is trying some different melodies and “styles” out on her various singles. I appreciate that she has Max Martin on her songwriting team because he is one of the best songwriters in pop of the last 20 years. The music IS catchy, just like my wife said, and for that reason alone, it does the trick in making the world a little happier…if you can handle a little T-Swift. If her songs about relationship problems, revenge, secret flings, dance parties and finding independence in a new city are too trite or sappy or boring for you, then you won’t like this album. But if you have a little “blank space” in your day, I wish you would check out 1989. You might find you like it more than you thought you would.

Special Announcement: An appropriate conclusion to this review is to share with you the focal point of the next EP in my Folk Covers series. Even though Ryan Adams already released his own version of “1989”, unbeknownst to me, I had already begun working out my own folk covers of some of Taylor Swift’s most popular songs. You can expect a 4 or 5 song EP entitled “Swift Folk” later this calendar year. It will be comprised of songs from Red and 1989.

You’ve likely heard TSwift’s singles and seen her videos for this album, but, if not, here’s the one that launched her album to poptastic heights: Taylor Swift- Shake It Off