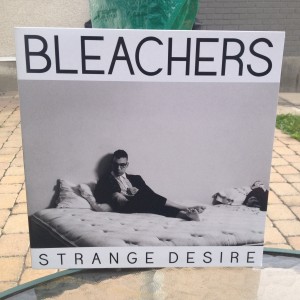 I really like the font on this album cover. Can anyone tell me the name of it? I will exchange one album recommendation with you in return. Also, no socks. This man clearly appreciates foot freedom.

J- So, my pal Sandy and I have shared many conversations on albums over the years. We concluded that one trend of music producers, bands and singers is to frontload an album with the best songs. Hook the listener in to your best stuff and although the album might be 12 to 13 songs, it’ll be the first 5 that leave a lasting impression. On those albums, the singles can be found in those first 5 songs, too. Our suggestion was that the band or singer should’ve released an EP, instead, to ensure a more consistent quality. Not all albums fit these criteria and, certainly this is a subjective matter, since some people enjoy the “deep cuts” more than the “singles”. So what does this has to do with Strange Desire?

Bleachers’ debut full-length is front-loaded….but it’s also middle-loaded and end-loaded. The first five songs feature the chart-topping singles: “Rollercoaster”, which is as good a summer anthem as I’ve heard in recent years, and “I Wanna Get Better”, a song that does that cool thing where it talks about a serious topic (in this case, depression) but does so in an upbeat, infectiously joyful manner. So, if Bleachers, aka Jack Antonoff, also of fun., had stopped at the fifth song, he would have produced one helluva sweet pop EP.

Thankfully, he continued to 11, had Grimes and Yoko Ono guest star on a few songs and produced an album of creative synth melodies, interesting electronic sampling, and meaningful lyrics. I appreciate the musical themes he’s created on this album, melodies or melody shapes that repeat in different songs. For example, the main chorus melody of “Wild Heart” is reprised near the album’s end, mixed into a Postal Service meets Bjork kind of piece. Songs like “Reckless Love” and “Like a River Runs” have a huge sound, thanks to a well produced reverb on the drums, Edge-esque guitar parts and swirling synths.

For music fans who love big choruses, the 80’s pop influence, cool synth sounds, introspective and relationship-oriented topics, Bleachers has a double EP of gold here. Great for summer listening. I’ll update you another time on how it feels during the winter!

Watch the music video for the single: Bleachers- Rollercoaster