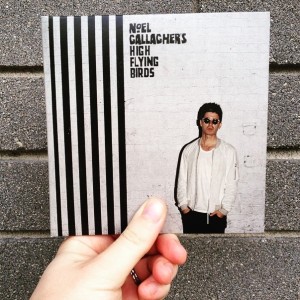 Future Rock & Roll Hall of Famer Noel Gallagher, wearing the rock shades, challenges you to a debate. Topic is up to you but be prepared for an onslaught of curse words, constructive (and hilarious) criticism, and, oh yes, 60’s inspired musical gold.

M- As soon as you hear the single (Riverman), you know you’ve got to run out and pick this one up.

J- Yeah. I think we were in the car, listening to CBC Radio 2 as we often do, and they played the single. I didn’t know I was missing that song in my life until I heard it.

M-He’s still got it, people. Do I need to share much more?

J- Well, it’s an album review, so that’d be appropriate.

J- Yes it is but it’s not Oasis. It’s his solo project so people might be concerned it won’t be as good.

M-Put your full trust in his legendary status and give it a listen. Awesome lyrically and the melodies are pretty much golden.

J- My favourites, given those criteria, are “The Girl With The X-Ray Eyes”, “While The Song Remains The Same”, which has got some touches of jazz and funk to it.

M-A very smooth eeriness in some, and head-bobbing rock in others.

J- Like “The Dying Of The Light”, with its slow pace, wailing guitar notes and gentle keyboard sounds for the eeriness. Head-bobbing rock would be… “The Mexican” and an Oasis-esque bopper like “You Know We Can’t Go Back”.

J- Yeah, that was a nice touch. So was the use of instruments like saxophone on a few tracks.

M-Is it an earth shattering rock album? No. But it’s solid.

J- It is solid. It’s a generally decent listen all the way through.

M-Super easy to listen to. That voice we know and love, and let’s face it, makes a bunch of us nostalgic, is just waiting for you to join in.

M- and sing along, people!