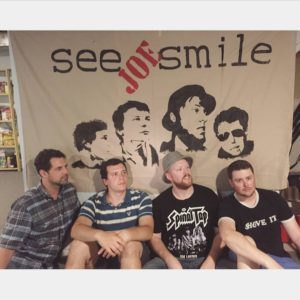 A little older, a little wiser but still recognizably the same guys.

When Thom said he’d like to celebrate his 30th birthday with a concert, it made sense that we would reunite the full band lineup to play. 30’s a big milestone and deserves some fanfare, and that’s exactly what we provided. It also turned out to be a farewell to the home that served as our main practice space for many years.

The old family home was sold this summer and so Thom’s 30th birthday concert became a farewell to Maley Lane, as well as a special birthday surprise for his mom, Cathy. It was fun returning to the house to practice, all of us living quite a distance away from it now, and being graciously welcomed by mom with snacks and drinks while we practiced. Just like the old days…

We missed Kaitlin who has just given birth to a boy, a few days earlier, but we were happy my wife, Michaela, was ready to jump in and sing. She’s been singing with the band for any full band appearances we’ve made over the past five years so it was great for her to join us for this special occasion.

The setlist included our most popular SJS originals and a few of our favourite covers:

It’s All Been Done (medley in D, including All Star, Go Your Own Way, Ahead By A Century & 500 Miles)
Sensible Jenkins
Bent Out Of Shape
1979
Ordinary Day/Baba O’Riley

It was an absolute pleasure to join the lads for this show and see if we could still fire up some rock & roll. Everyone in attendance had a great time and there was plenty of dancing and singing along to the songs. We’ll miss our ol’ stomping grounds, Thom, most of all but we’re happy we got to play.

Thanks to Thom for the idea and for giving us a reason to rock.
Thanks to Tyson, Paul and my wife, Michaela, for saying yes, taking time out of their busy schedules to practice, and for being so smiley.
Thanks to Sam, Thom’s son, for stealing the show at the encore with his own, 3-song set of tunes. Looks like we may have a new generation of musicians, amongst our families, emerging in the coming years!