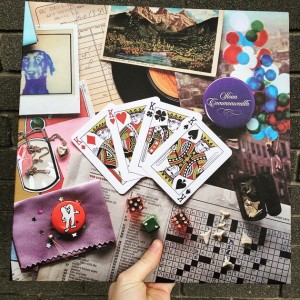 Those cards have a deeper meaning, representing a different personality for each album side. Neato!

There are SO MANY amazing things going on musically in this album. So creative, lots of variety, and the more you listen, the more you notice – the bass line, cool beats, choir vocals…it’s SO much fun. This is certainly a music lover’s album, dare I say, a vinyl lover’s album. Their 11th full-length was released as a double LP, with each band member writing a side. It’d be easy to say this is very much a Beatles White album-influenced thing, and, to an extent it is, but Sloan has produced something that might be just as good. Each band member’s contributions are woven together so seamlessly on their respective sides. Each side has a unique character to it, partly due to each member’s unique voice— their actual singing voice and writing voice.
Husband and wife agree that our favourite is Disc 1, Side A, written and led by Jay Ferguson. It’s incredibly poppy, featuring the lead single “You’ve Got a Lot on Your Mind”, which has a joyous piano riff, beautiful harmonies and a summery feel. “Three Sisters” is like Sexy Sadie meets Abbey Road medley. It’s got battling guitar solos, a steady, plunking piano, and haunting ooohs. “Cleopatra” is a 20th century fox is just one of many times in this album where the lyrics catch our attention with their cleverness. This song also references the lead single at one point, another clever motif, and, did I mention that all of these songs blend into one another. A lot of thought went into the production of this album, and we haven’t even touched on Andrew Scott’s 17 minute “Forty-Eight Portraits”, which wins an award for best rock medley of the 21st century. It might also win an award for coolest children’s gang vocal appearance. We’ve got tempo switches, stylistic changes, barking dogs, trumpet solos and, naturally, charming harmonies.

Chris Murphy and Patrick Pentland’s sides also had enjoyable moments, which will remind listeners of vintage Sloan tracks, if they are familiar with their late 90’s, early 00’s fare. Songs like “Carried Away”, “Take It Easy”, and “You Don’t Need Excuses to Be Good” are toe-tapping, hand-clapping fun. There’s something for everyone here and, for those of us that enjoy variety, Commonwealth will make you as happy as a trip to the local Chinese-Canadian dinner buffet. Nicely done, Sloan. We are very impressed.

Watch the music video for the single: Sloan- You’ve Got A Lot On Your Mind (Audio)