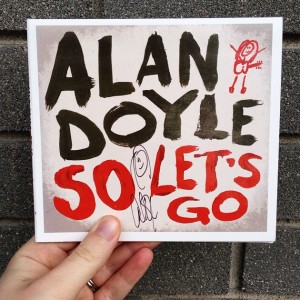 For the initial album release, Alan offered fans the option of purchasing a signed copy. How could we turn that down? Love the smiley face!

So Let’s Go by Alan Doyle

M- Ahhhhh, this album is so much fun! Classic Alan.

J- What do you mean by Classic Alan?
M- I mean, it’s a perfect mix of pop and that awesome, well-known Newfoundland vibe. Catchy melodies and rhythms, sincere lyrics, and easy to sing along with.

J- Okay, okay. I hear that. The Newfoundland vibe is as much a vocal thing as a musical thing. Alan’s voice immediately makes you feel like you’re at a kitchen party in St. John’s.

M- He’s got some serious pipes.

J- BIG TIME! And hearing instruments like the fiddle, bouzouki, and accordion support that kitchen party vibe well, too.

M- And he’s Canadian, so bonus.

J- Although it’s hard, at times, to define a Canadian sound, I have no problem in stating that this is very much a Canadian album.

J- Not yet, but we know some families with children.

M- It was a question for the people reading this, not you, silly.

M- Hehe. They’ll love it too, especially So Let’s Go, and 1,2,3,4.
J- You’re right! Those songs have easy to sing choruses and even some parts where you can just shout out the words at the top of your lungs. Very freeing. Very fun. We even had the vocal group at our old school sing “So Let’s Go” and it was a blast.
M- So fun. Overall, the songs are short and sweet, and engaging. My personal fave is “I Can’t Dance without You”.
J- I like that one and I’m surprised it hasn’t been released as a single yet. So far, we’ve only heard “So Let’s Go” and “The Night Loves Us” on CBC Radio 2, who does a great job of playing Canadian content. There are a few ballads which are quite pretty, like “Stay” and “Shine On”, which evolves into quite a rollicking number by the end. I think this album will age well since each song brings something a little different to the table. Not just for fans of Great Big Sea to enjoy, So Let’s Go is a home run of an album. Check it out!