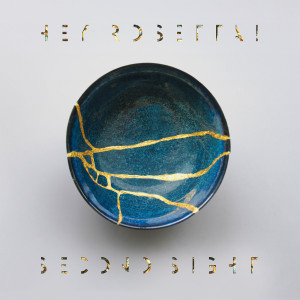 Does it bother anyone that the letters on this album are only half-letters? For people who struggle with reading, this is not a very friendly album! That said, I do enjoy the sphere. It reminds me of playing marbles in elementary school.

J- I remember reading somewhere that the brain is most affected by music during the teenage years and into the early twenties. I’m not sure of the validity of that but the fact that music has a significant influence on us during those years is likely less disputable. That’s why so many older people talk about the “good ol’ days” of music. They love their classic rock, pop, swing, jazz, insert popular music of that era. (Shout out to Chez 106!) Think about it. You likely have powerful associations to music from your youth, feeling intense happiness, sadness, and everything in between, with a side of nostalgia. When I heard this, I feared the worst for my ever so gently aging self. Would my connection to music start to lessen? Disintegrate? Dull?

Second Sight by Hey Rosetta! gives me plenty of hope and inspiration. These days, few albums can give me the chills (also known as the feels) but this one does it. The arrangements are so well put together. There are great crescendos of sound that rush into the soul and overload the synapses. There are gentle swells that calm the heart and allow me to remember the importance of soaking up the music, just as I might soak in the rays of the sun (though from my skin colour, you’d never be able to tell).

Alright, so that’s me waxing poetic with descriptive language, but some of you want me to get down to brass tacks. I ain’t got no brass tacks! This band ain’t got no brass either! They do have strings though and their inclusion is a real treat to the ears, complementing the excellent guitar, keys and rhythm work that is commonly found in pop/rock music such as this. Tim Baker’s voice is a real beauty and he makes ordinary words sound cool, interesting and important. It’s all in the pronunciation, folks.  Listen to “Cathedral Bells” or “What Arrows” to hear what I mean. They are beautiful ballads.

Standout tracks include “Soft Offering (For the Oft Suffering)” and “Kintsukuroi”, which were released as singles. They’re quite catchy, featuring some impressive drum parts by Phil Maloney. My other favourite is “Neon Beyond”, which begins with a summer-type, reggae-ish vibe, moves into a sparsely played, bluesy section and climaxes in a heavy wall of sound, akin to what you’d hear in Weezer’s early albums. This is currently my favourite Canadian rock band. My wife digs them too and we both highly recommend that you give this album a chance. Maybe you can put it on your Christmas wish list!